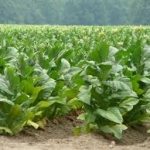 Tobacco is an agricultural product processed from the leaves of plants in the genus Nicotiana. It can be consumed, used as a pesticide and, in the form of nicotine tartrate, used in some medicines. It is most commonly used as a recreational drug via smoking.It is a valuable cash crop for many third world countries. Tobacco comes from plants of the genus Nicotiana of the Solanaceae family (nightshade family). The product is manufactured from the leaf and used in cigars and cigarettes, snuff, and pipe and chewing tobacco. Tobacco plants are also used in plant bioengineering, and some of the 60 species are grown as ornamentals. The chief commercial species, N. tabacum, is believed native to tropical America, like most nicotiana plants, but has been so long cultivated that it is no longer known in the wild. N. rustica, a mild-flavored, fast-burning species, was the tobacco originally raised in Virginia, but it is now grown chiefly in Turkey, India, and Russia. The alkaloid nicotine is the most characteristic constituent of tobacco. The harmful effects of the nicotine, tarry compounds, and carbon monoxide in tobacco smoke vary with the individual’s tolerance.

In consumption it most commonly appears in the forms of smoking, chewing, snuffing, or dipping tobacco. Tobacco had long been in use in the Americas, but upon the arrival of Europeans in North America, it quickly became popularised as a trade item and a recreational drug. This popularisation led to the development of the southern economy of the United States until it gave way to cotton. Following the American Civil War, a change in demand and a change in labor force allowed for the development of the cigarette. This new product quickly led to the growth of tobacco companies, until the scientific controversy of the mid-1900s.

There are more than 70 species of tobacco in the plant genus Nicotiana. The word nicotiana (as well as nicotine) is in honor of Jean Nicot, French ambassador to Portugal, who in 1559 sent it as a medicine to the court of Catherine de Medici.

The usage of tobacco is an activity that is practiced by some 1.1 billion people, and up to 1/3 of the adult population. The World Health Organisation(WHO) reports it to be the leading preventable cause of death worldwide and estimates that it currently causes 5.4 million deaths per year. Rates of smoking have leveled off or declined in developed countries, but continue to rise in developing countries.

Previous Do Cigarette Filters Help?
Next Stress and Smoking