More often than not people start smoking at school because all their friends are doing it and it is “cool”.
Smoking at an early age increases the chances of you continuing to smoke into your adulthood and it can have some severe effects in your later years. These effects are:
Breathing problems 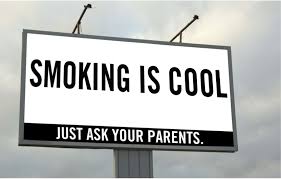 ■ Tired muscles and delayed growth
■ Thick, sticky blood – making the heart work too hard
■ Failure to launch (lower ability to achieve an erection)
■ More belly fat
■ Zits Risks associated with continued use
■ Blindness
■ Arthritis and weak bones
■ Decreased circulation in toes or feet (possible amputations)
■ Heart attack and cancer
Probably the most unfortunate thing about this is that these symptoms often appear quite late in life, they usually become apparent from about the age of forty or so.
The good news is that if you quit smoking the body can repair itself. The earlier that you stop smoking cigarettes the quicker your body will repair itself. Make the decision to quit smoking cigarettes and stop exposing yourself to the nasty effects of smoking.

Previous Chemicals in cigarettes
Next Social Smoking can Kill You!