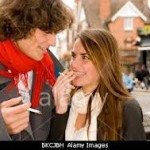 I recently had a woman who came to see me to quit smoking. She was prone to skin cancers and had decided to quit smoking. She decided that she would quit by willpower and to do this chose not to be around her husband when he smoked. Usually they would go outside and talk and smoke together but now she chose not to go outside with her husband and smoke.
Her husband had countered this strategy by saying that by not smoking with him she was not supporting her; he said “how can you give up smoking when I am so stressed”. The reality is that many of us go through life without smoking because we are stressed. He has taught himself a habit that says that he has to smoke when he is stressed. In reality he is adding more stress as smoking increases his blood pressure. There is also an element of the husband wanting to control his wife. What also came out in the conversation was that in wanting to be accepted and fit in with her husband the wife was willing to smoke and increase her risk of cancer.
Needless to say, I did not carry out the quit smoking process. Instead I sent the wife home and said that until she had reached agreement with her husband I could not carry out the quit smoking process.