One of my clients came back the other day as he had started smoking. He started smoking within 48 hours of doing the quit process. When this happens it usually happens for one of two reasons: you don’t really want to quit or deep in the unconscious mind there is a feeling that there is a benefit, 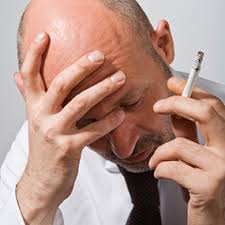 After some questioning it transpired that the client thought that he wanted to quit smoking but deep in his unconscious mind was an emotional tie to smoking. You see the client was spending all his money and energy on bringing up his family and supporting his wife in her studies. He felt that the only thing that he had that was his was smoking. Smoking was his and his alone, it provide an excuse to have time to himself. The client saw this and was horrified to think that the only thing he had for himself was smoking.
This of course was untrue but perception is often reality. What we did here was to get the client to see what else he had in life, beautiful children, a loving wife etc. he was so absorbed in himself that he had made himself a victim and could not see any other positives in his life. He hated smoking but still did it as he thought that it was the only thing he had.
We have since established what his highest values in life are and linked it to smoking so that he can see how smoking will not help him achieve his highest values. As a result he is now a permanent non-smoker.