The reasons that my clients have to want to quit smoking are varied.  Just simple reason such as ‘I’m Over it!’ are common.  As are health; kids; grand-kids and sickness, they are common as well.  However, recently I had a client who told me a completely differently reason.  He’d had a health check and the Doctor told him if he continued to smoke cigarettes he would have to give up his job, which he loved. 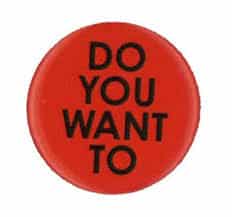 Sounds like a really good reason to want to quit smoking, right? This is when I then asked him a really crucial question. If cigarettes were free would you still smoke them? His answer was, well if they were free I probably would because I like smoking.

Working with the Want to Quit Smoking

The difference between need and want might sound small but it is crucial. To succeed in quit smoking you have to want to quit. You have to be at the stage where smoking is doing nothing for you and you are fed up with doing it. Your want has to be bigger than your need to stop smoking!

So if you have decided that you want to stop smoking cigarettes make sure that you really want to quit, not that you need to. When you want to you are already halfway there.

Its like most thing in life, you have to want to.