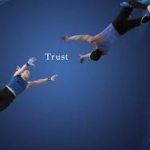 The other day at Quit Smoking in 60 Minutes in Capalaba had a client and as we were talking I could see that this person saw the world as black and white and that he judged people solely by his own values. When we were talking about trance I told him that he had to accept my suggestions 100% no questions asked. When I said this he immediately said,”I can’t do that, you should always question things.” I knew immediately that I had a problem on my hands. Coupled with this was that the client was not really sure why he wanted to quit cigarettes.He could not see that it was bad for his health.

Against my better judgement I tried to induce trance and unsurprisingly was not successful. No matter how I tried the client would not accept my suggestions. So was it that he did not trust me or was it because he would not accept suggestions without question? I believe it was a bit of both. I felt that he did not really want to quit and that he firmly believed that he had to question everything.

Previous Why Can’t I Quit?
Next Quit Smoking Now and Live 10 Years Longer