The effect of smoking on the skin and aging is obvious when I see clients at Quit Smoking in 60 Minutes in Capalaba. Smokers do look older than they are. 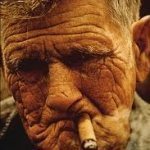 A new study says that if women quit smoking before the age of 30 they could almost completely reverse the impact of smoking, while those aged forty could stand to add at least ten years to their life.
It may surprise you to learn that, in both the US and the UK, smoking ranks higher than obesity as the leading cause of preventable deaths.
This fact has spurred UK researchers, funded by Cancer Research UK, the British Heart Foundation and the Medical Research Council, into conducting one of the largest studies ever undertaken into the effects of smoking and, crucially, the benefits of quitting.
The study, published in the Lancet, contained some eye-opening, and encouraging, findings.
Of the 1.2 million women in the sample, 20 percent were smokers, 28 percent had quit and 52 percent had never smoked.
The researchers were able to show that those women who had smoked cigarettes throughout their adult lives were three times more likely to have died than non-smokers.
Furthermore, those who smoked throughout their adult lives were overwhelmingly more likely to suffer and then die of lung cancer, heart disease and stroke. It is important to note that even those who considered themselves light smokers, smoking less than ten cigarettes a day, were twice as likely to die early when compared to non-smokers.
Quitting before middle age, however, was shown to dramatically reduce that risk.
Women who stopped before 30 years of age were shown to have only a very small (5 percent) increased risk of death compared to non-smokers. Women who quit before they were fifty had a 56 percent increased risk of death compared with non-smokers. However, this group still showed a 72 percent decrease in mortality rates when compared to those rates associated with smoking.
The impact of quitting observed in the study was made stark in the study’s conclusion:
Among UK women, two-thirds of all deaths of smokers in their 50s, 60s, and 70s are caused by smoking; smokers lose at least 10 years of lifespan. Although the hazards of smoking until age 40 years and then stopping are substantial, the hazards of continuing are ten times greater. Stopping before age 40 years (and preferably well before age 40 years) avoids more than 90% of the excess mortality caused by continuing smoking; stopping before age 30 years avoids more than 97% of it.
Overall, those who quit smoking could stand to add ten years or more to their lives than those who would continue to smoke throughout their adult life.
However, given that the link between smoking and a number of diseases has already been established, and that an increased mortality rate among smokers is already well evidenced, this study apparently reinforces what we already know about smoking-related risks.
The study also points out that quitting smoking really could add years to your life, and while having never started at all would have been preferable, it really isn’t too late to quit and have a meaningful impact not only on the amount of years you will live but, and importantly, the quality of life you will also enjoy in your later years.
Even though this study was undertaken in the UK the chances are high that it will apply to Australia. If a study was done in the Capalaba, Redlands and Cleveland the chances of the statistics that were found in the UK will be the same. It makes sense to quit smoking and ensure you can live a life of vitality and longevity.

Previous What’s Trust Got To Do With It?
Next Darn!! Started Again!