Are you a smoker with an “it won’t happen to me” mindset? If the state of your health is not enough to stop you, is the price of your good looks?

It’s a fact — apart from sun damage, smoking ages the skin faster than anything else. So why are so many still lighting up? 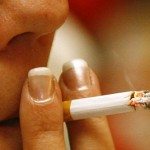 The term was coined by medical dictionaries in the ’60s to describe the ageing effect cigarette smoke has on the skin. Wrinkles, a grey, lifeless complexion and bony contours were the words used — surely enough to scare off any potential smokers? Apparently not: 27 percent of Aussie women are still lighting up, puffing on an average of 18 cigarettes a day.

But let’s face it, today’s smokers are more likely to be greeted by shock and gore ads showing tar being squeezed out of a lung and a blackened gangrenous foot awaiting amputation rather than the pallor of a smoker whose looks have gone up in smoke.

According to anti-smoking specialist Natalie Clays from Allen Carr Clinics, “These scare tactic campaigns just don’t work”. Perhaps appealing to the mortality of a generation who think they’re immortal isn’t the most effective way to get the smoking-is-bad-for-you message across.

Instead, why not appeal to their sense of vanity and point out the damage cigarette smoke can do to your skin — and your looks?

Nicotine adds years and, according to Clays, the effect smoking has on the ageing process is significant — and it gets worse, the damage begins as soon as the first puff of smoke is inhaled. With just one drag more than 1 trillion free radicals are produced by your lungs, triggering the erratic behaviour of cells that sets the premature ageing wheels in motion.

Once the draw back begins, the serious skin damage gets underway which breaks down the body’s supply of collagen;

The million-dollar question is what can be done to reverse the damage? Forget about pricey eye creams and skin-renewing serums, the first step is the most obvious — stop smoking. If the cancer and stroke warnings seen in advertising campaigns and cigarette packaging aren’t enough to encourage you to quit, perhaps the very real possibility of adding years to your complexion will.

While smokers in their twenties are yet to notice the real damage smoking is doing to their skin, Clays says once you begin creeping into your thirties and forties the effects are there for all to see. In fact, she says smoking can “easily add 10 years” — and if you’re in your fifties or sixties, make that 20 years.

But, on the flip side, quitting can quickly restore some of that youthful vitality, bringing back your colour and getting rid of the dullness associated with ‘smoker’s face’.

The sobering news is that, while you won’t be able to completely reverse the damage already caused to your skin’s elasticity and vitality, quitting coupled with a healthy, balance diet, skin supplements and anti-ageing skin care will help to restore some of your skin’s youthful vigour.